A very unique toaster that functions as both a toaster oven and a toaster situated on top of the toaster oven. The toaster is a wide slot that can accompany two bread slices or bagels and surprisingly toasts well and evenly. The toaster has seven shades of browning. It doesn’t take up alot of space on the counter being only 16.9 x 9.6 x 9 inches. The toaster oven is small and can hold several slices of pizza. It works and cooks well and comes with an aluminum trey which cleans up fairly well. You can easily switch between the toaster and toaster oven mode with a simple flip or even use them both at the same time!

the single long slot doesn’t hold two slices of toast if you buy the whole grain type, like Pepperidge Farm, HealthNut, etc.; secondly the apparatus that holds the toast when you push the lever down causes the bread to bend, which in turn causes uneven browning and toast that isn’t flat. I’ve even had the slice of bread fall into the oven part. There is no crumb trey meaning that to clean the Toastation Toaster Oven you have to flip it upside down. The alarm sound after toasting is done is louder and more annoying than it needs to be.

The Hamilton Beach 22720 Toastation Toaster Oven is a unique toaster that combines a toaster oven and toaster into one that works fairly well despite a some problems. It lacks a crumb trey and certain breads can’t fit in the toaster slot. On the positive side the functionality of being a toaster oven and toaster is a great and both toast/cook great with the toaster having seven shades of browning. Its small space saves up on counter space and can fit several pizza slices 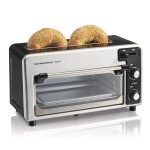 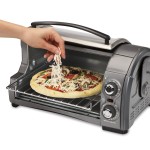 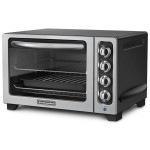 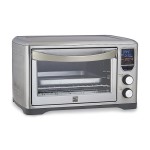 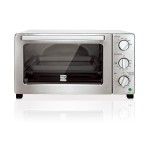