The best feature of the Cuisinart Touch to Toast Leverless 4-Slice is the leverless feature that will automatically lower toast that is present in the slots when pressed. It works well and makes you not want to return to a push lever again! The level of toasting brownness goes from light(1) to almost burnt(7) supporting any toasting settings you’d ever want. If you’re only toasting one bread instead of two reduce the toasting number by one because it won’t take as long to toast one bread then it would two. The Touch to Toast does a decent job at even toasting. At lower settings it will slightly brown your toast on both sides for easy butter spread and at the highest setting 7 will leave your toast dark and crispy. Thanks to its settings you have a wide variety of toasting shades to choose from with other options including cancel, defrost and reheat which all work very well and are great features. The ring sound when food is done toasting is a soft ping and fortunately not a disturbingly loud sound that’s not needed in the mornings after you’ve just woken up. The metal finish is stainless steel and it looks great. The unique design of the 4-slice makes it stand out in the kitchen and will have guests wondering where you got that new toaster.

Some customers feel that the cord is too short and should’ve have been longer than it is. They also felt that the cord should’ve been placed on the back of the toaster rather than the front because it gets in the way too much. The slots are also smaller then what some are used to from other toasters. With them being 5 1/2 inches wide some types of breads cannot fit or stick out of the toaster so make sure before looking into this toaster to know what kind of bread you have and if it might be too big for these slots. Because the Touch to Toast uses a motorized life, depending on the size of your bread it might not raise the bread high enough forcing you to fetch it out of the toaster. Another flaw with the Touch to Toast is the digital toasting settings that can only be set to numbers 1(light) to 7(dark). Its a slight flaw because you can’t set it to lets say 2 1/2 which might be a more ideal setting for some customers because the difference between the toasting for each number is notable. The ability to have more flexibility on toasting shades would’ve been an added benefit.

The Cuisinart Touch to Toast Leverless 4-Slice Toaster is one of the best toasters Cuisinart has made. They nailed the elements that make a toaster and did them well with few flaws. Its unique and sleek design for a toaster makes it stand out in a good way in the kitchen. The mechanical elements make the Touch to Toast stand out as a modern toaster with its leverless lift for automatic lowering and lifting along with the lcd display. The use of 4 toasting slots are a nice feature as well since it functions as two pop-up toasters in one which is always a plus for us. Finally the 4-slice has a unique and sleek design thanks to its proper stainless steel finish. It will leave guests admiring the unique design. On the negative side its cord is too short and slots should’ve been a bit wider to accommodate larger breads. While the variety of toasting shades is nice, the ability to set the timer to half increments would’ve been great. Overall the Cuisinart Touch to Toast Leverless 4-slice is a great toaster that you can’t go wrong with. 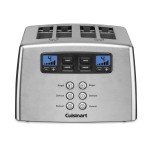 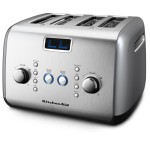 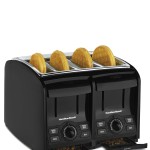